View source
watch 01:36
We're Getting Mutants in the MCU - The Loop
Do you like this video?
Play Sound

Ristarte has the appearance of a young blonde woman who is usually thought of as attractive by the mortals she meets. She wears a blue ribbon in her hair as well as a white dress that partially reveals her chest and fully reveals her shoulders and legs.

When she was once the human Tiana, her facial features and figure were the same, but she had short dark brown hair and a pink bow instead.

As a novice, Ristarte is less confident in her goddess abilities than her more senior fellow deities. This makes her somewhat clumsy and rather incautious, especially compared to Seiya Ryuuguuin. However, she is evidently a caring goddess.

Rista usually chooses Japanese men to be heroes on her quests to save the worlds. When tasked to save Gaeabrande, she summons Seiya to become a hero, as he was Japanese and had superior stats. She realizes that he is overpowered, super handsome, and truly out of the ordinary as he breaks many of the traditions common in Isekai stories.

However, Rista is very vain and prideful about her appearance, often complimenting herself, and is sensitive when people call her "stinky".

Rista also cares deeply about the lives of the citizens of Gaeabrande and hopes to save as many as possible. She often heals injured people or delivers food to her hero, Seiya. Due to being a younger goddess, many of the other deities treat her like a younger sister or child.

She has been shown to be quite perverted or lustful, often showing her desire for Seiya. She often thinks about being his wife or fantasizes about kissing him or falling passionately in love with him. Considering she is the reincarnation of Seiya's lost love, her infatuation with him is likely past life memories in her subconscious.

Ristarte was originally a healer named Tiana who was the princess of a country known as Termine in the world of Ixphoria. She joined a party in order to defeat the Demon Lord and was very close to its leader, Seiya Ryuuguuin. Despite Seiya being very reckless, she still felt at ease when he used his catchphrase "Everything's gonna be okay". During the fight against the demon lord, it was revealed that she was pregnant with Seiya's unborn child and she was killed alongside the baby.

Due to Ariadoa's guilt, Tiana was then reincarnated as the goddess Ristarte 100 years before the start of the series. She trained as a goddess to save worlds fated for destruction until she was tasked with saving the S-rank world of Gaeabrande.

To complete this assignment, she summoned Seiya to aid her without considering his bizarre personality. She does her best to accommodate his overly cautious nature, but usually grows frustrated with the summoned hero.

During and after Seiya's fight with the Demon Lord (Gaeabrande) to save Gaeabrande, she overuses her Order powers to save him from dying twice due to his successive uses of Valhalla's Gate. This caused her superiors to issue a punishment to her and thus be tasked with saving an SS class world without her powers.

As a goddess, Ristarte is immortal and cannot be killed by conventional means. However, compared to most other gods, Ristarte is rather weak. While being a healer would make for good support, her healing is outdone by many common items. However, she can use her full potential to heal someone from a near-death state, which she does by saving Seiya Ryuuguuin from the side effects of Valhalla's Gate.

Rista also can spawn a set of angelic wings to fly around as she has Flight (Lv 14) and can fly up to 60 to 80 kph. However, even Seiya can fly faster and farther than her. Rista can carry Mash and Elulu whilst flying, so she has at least some physical strength. She can also open up portals from the Divine Realm to Gaeabrande and back.

Her loose hair strands have often been used for Seiya to synthesize powerful weapons.

Like Seiya and Chaos Machina, Rista has the ability to scan opponents' stats. She sometimes resorts to her 'Megamic Power' to scan people's abilities if they have used the Fake Out skill (which shields the player's true stats).

She can use Appraise, which lets her see a detailed description of an item.

She can perform anti curses as taught to her by Baldr.

Rista (Tiana) and Seiya were engaged in a previous world called Ixphoria. Back then, Seiya was much more carefree and happy-go-lucky while Rista was also pregnant with his child. However, they were all killed by the Demon lord, so this had a lasting impact on Seiya's subconscious that would make him more cautious and calculating in the future.

The first time the goddess Rista summons him, she is strongly attracted to Seiya Ryuuguuin, but she is sometimes annoyed by his cold and abrasive personality. Seiya does not reciprocate these feelings at first and he often ridicules her role as a goddess. He often picks some of her hair lying around to make monster-slaying swords using his Synthesis skill. Despite this, Seiya shows moments of deep caring, such as saving Elulu from sacrificing herself to become a sword. These moments give Rista great hope and make her proud to have chosen her hero Seiya to save the world.

After Rista summons Seiya a second time (with the help of Ishtar's blessing), Seiya is considerably kinder to Ristarte, acknowledging his feelings for her and even allowing her to be physically affectionate towards him to a certain extent. Nevertheless, he is still overcautious and harsh, but this is because he is deeply concerned for her safety during their mission in Ixphoria.

Rista and Aria are very close, with the latter often having tea with Rista. Rista usually confides in Aria, who offers helpful advice and introduces gods and goddesses to help with Seiya's training. Ristarte looks up to Aria and thinks of her as her best friend. The two were close during the time when Rista was a human and, after the failed world, Ariadoa requested that Rista be made a goddess. The two are so close that Aria was the only one Rista was responsive to after Seiya's death. Ristarte is also envious of Aria, usually praising her almost perfect record and being jealous of it. Rista is also jealous of Aria's breasts, feeling that she bests her even in terms of appearance.

Ristarte is usually kind to Mash and the two are good friends. Rista recognizes Mash's power, and believes he has the strength to keep Gaebrande safe. She does become exasperated when Mash displays signs of his master's absurd cautiousness.

Ristarte and Elulu are very close and share a sisterly bond. They have similar personalities and thus are exasperated by the rest of their party's antics. Ristarte acknowledges Elulu's power and trusts her to keep Mash under control.

Rista appears to be a bit scared of Adenela, with her mood swings and creepiness playing a big factor. Nonetheless, she looks up to Adenela and is shocked when she notices her love for Seiya. After Adenela is heartbroken by Seiya (much to Ristarte's chagrin), she goes to visit her, only to be terrified of what she's turned into. After Seiya calms her down, Rista disapproves of his using of her. After Seiya's death, Adenela empathises with Ristarte, saying that she was more worried for her than about herself.

At first, Ristarte was very respectful to the Cerceus, as he was in charge of Seiya's training. As time went on, however, and Cerceus started becoming more cowardly, Rista started to lose respect for him. After he gave up on the sword, Rista gave up on him, even ceasing to call him by the -sama honourific. She doesn't take a particular liking to his cakes either. 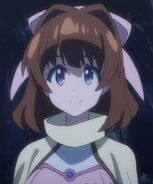 Rista making one of her many hilarious faces

Community content is available under CC-BY-SA unless otherwise noted.
Advertisement